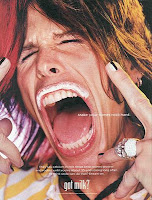 from barfblog: Aerosmith frontman, American Idol judge and androgynous scarf-model Steven Tyler fell in his shower this morning in a Paraguay hotel, requiring treatment for injuries to his face, including loss of teeth. Sources connected with Tyler told TMZ dude was suffering from dehydration caused by a bout of food poisoning. TMZ spoke with the singer's manager ... who described Tyler's injuries as "minor" and said Steven has already been released from the hospital.