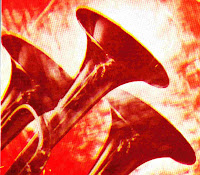 Bob Tuskin puts heads together to discuss rational explanations for pre-proclaimed, "Trumpets of the Apocalypse," AKA strange sounds heard worldwide, first weeks of 2012. Tuskin brings in Francis Welch and Lucas911, hosts of Collision Course to do simulcast that results in interesting roundtable discussion on strange sounds of 2012. A general distaste of proclaiming strange sounds as trumpets of the Apocalypse, is declared, and also, a dislike of tendency to attribute everything to HAARP. They also believe many You Tube videos are faked. Researcher Scott Owen expresses opinion sounds are from an Earth in distress, in second hour. The Jungle Apocalypse podcast with Owen can be downloaded here, where "Strange Sounds of Apocalypse" were discussed on January 16th.

A Truther Girl Sonia video, "Strange 'Sounds of the Apocalypse' - A Scientific Explanation?"  promotes a HAARP explanation, which cites Yoichi Shimatsu article from rense.com, "Eerie Sounds - The Haarpies Orchestra Of Woodwinds And Brass." The article provides input not seen elsewhere as postscript to explanation strange noises may be attributed to highly charges protons trapped in artificial elecromagnetic belts:

"The Hardtack and Argus nuclear blasts of 1958 created the artificial electromagnetic belts over the Pacific and Atlantic, which trapped these into resonant spirals of high energy. In the next year, 1959-60, when the system was operational, running or flying smoothly, the USA saw the biggest winter snowfall since 1912."

Shimatsu asks and provides observation, "massive winter storms on both coasts of the United States arising? The proton and electron surges into HAARP are electrifying the clouds." The present writer leans to HAARP, although as one poster declared, "it's the resonant sound from crossing the highly energized galactic ecliptic," may be just as plausible?