strategy being devised to protect use of bpa 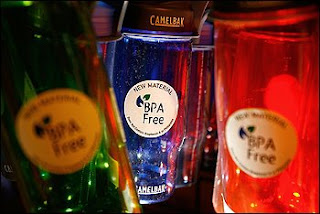 from washington post: Manufacturers of cans for beverages and foods and some of their biggest customers, including Coca-Cola, are trying to devise a public relations and lobbying strategy to block government bans of a controversial chemical used in the linings of metal cans and lids.

from wikipedia: Global production of bisphenol A in 2003 was estimated to be over 2 million metric tonnes. In the U.S., it is manufactured by Bayer MaterialScience, Dow Chemical Company, General Electric, Hexion Specialty Chemicals, and Sunoco Chemicals. In 2004, these companies produced just over 1 million t of bisphenol A, up from just 7,260 t in 1991. In 2003, annual U.S. consumption was 856,000 t, 72% of which was used to make polycarbonate plastic and 21% going into epoxy resins.