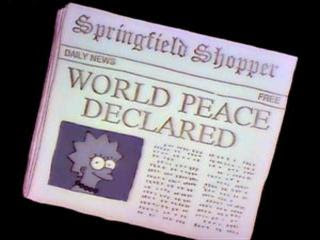 studies show world ‘has never been this peaceful’

from ap: Historically, we have never had the world this peaceful. That is the thesis of three new books, including one by Harvard psychologist Steven Pinker. Statistics reveal dramatic reductions in war deaths, family violence, racism, rape, murder and all sorts of mayhem. In his book, Mr Pinker writes: "The decline of violence may be the most significant and least appreciated development in the history of our species." It runs counter to what the mass media is reporting and essentially what we feel in our guts.

In his new book, "The Better Angels of Our Nature: Why Violence Has Declined", Mr Pinker's findings include the fact that the number of people killed in battle has dropped by 1,000-fold over the centuries as civilisations evolved and that rape in the United States is down 80 per cent since 1973.

Mr Pinker says one of the main reasons for the drop in violence is that we are smarter. IQ tests show that the average teenager is smarter with each generation. "As we get smarter, we try to think up better ways of getting everyone to turn their swords into ploughshares at the same time," Mr Pinker said.

Mr Joshua Goldstein, a professor of international relations at American University and author of "Winning the War on War", has also been telling the same story as Mr Pinker, but from a foreign policy point of view.

The "Human Security Report 2009/2010" - a project led by Mr Andrew Mack, former head of strategic planning for United Nations Secretary General Kofi Annan - is a worldwide examination of war and violence and has been published as a book. It shows that the average annual battle death toll has dropped from nearly 10,000 per conflict in the 1950s, to fewer than 1,000 in the 21st century.

Mr Mack and Mr Goldstein emphasise how hard society and peacekeepers have worked to reduce wars, focusing on action taken to tamp down violence.