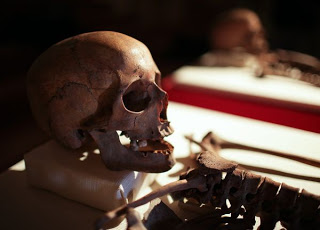 bones of roman couple may have been identified

from national geographic: The skeletons of two married, early-Christian saints—said to have been buried alive nearly 2,000 years ago—may have been identified in Italy, scientists announced Thursday. Analysis of the skeletons—sealed off for centuries in an Italian cathedral until recently—seems to support the legend of Chrysanthus and Daria, who are said to have been persecuted in the city of Rome for being Christians. According to ancient stories, the Roman Empire killed the celibate Roman husband and wife in the third century A.D., after they had converted many Romans to the fledgling religion. Though there's no way to identify the skeletons with 100 percent certainty, "all of the evidence we have gathered points toward the relics having belonged to Chrysanthus and Daria," investigation leader Ezio Fulcheri, a paleopathologist at Italy's University of Genoa, said in a statement.