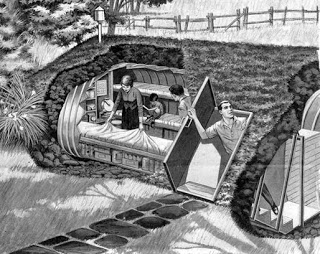 from reuters: When Patty Tegeler looks out the window of her home overlooking the Appalachian Mountains in southwestern Virginia, she sees trouble on the horizon. "In an instant, anything can happen," she told Reuters. "And I firmly believe that you have to be prepared."

Tegeler is among a growing subculture of Americans who refer to themselves informally as "preppers." Some are driven by a fear of imminent societal collapse, others are worried about terrorism, and many have a vague concern that an escalating series of natural disasters is leading to some type of environmental cataclysm.

They are following in the footsteps of hippies in the 1960s who set up communes to separate themselves from what they saw as a materialistic society, and the survivalists in the 1990s who were hoping to escape the dictates of what they perceived as an increasingly secular and oppressive government.

Preppers, though, are worried about no government.