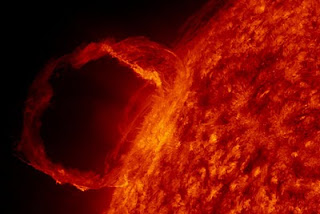 from ap: The sun may be about to put on a colorful light show. That's because of two minor solar storms that flared on Sunday and are shooting tons of plasma directly at Earth. Scientists said residents of northern regions - from Maine to Michigan and anywhere farther north around the globe - may see unusual northern lights. Usually only regions closer to the Arctic can see the aurora of rippling reds and greens, but solar storms pull them south. The federal Space Weather Prediction Center in Boulder, Colo., said the plasma will likely arrive late Tuesday night or early Wednesday. The storms are not much of a threat to satellites or power grids. Until recently, the sun was in a phase with few storms.