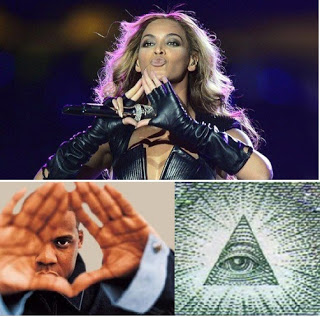 “…Yahoo! and Huffington Post published articles about this hand sign, asking if Beyoncé was “flashing an Illuminati symbol”. These articles however all come to the same conclusion: Beyoncé was doing the ROC sign to shout-out her husband’s label (duuuh) and everyone who thinks otherwise is a moron. Many of the articles then provide a quick, half-assed recap of what the Illuminati is, making sure to distort many facts to make the whole thing seem completely idiotic. This trend is becoming increasingly appearent on the web and mass media.”

“I admit that the mainstream sources are right: This hand sign is indeed the ‘ROC sign’. But here’s my question to these ‘journalists’: Where does the ROC sign come from? What does it represent? Why does a label named Roc-A-Fella (a nod to the Rockefellers, one of the most powerful Illuminati elite families) uses a triangle hand sign to represent itself? How about going a little further than the obvious superficial answer for a change, mainstream media?…to respond to the ridiculous claims of those mainstream articles: No, Beyoncé and Willow Smith are not IN the Illuminati. They are USED by the Illuminati-owned music industry to push an elite agenda. Pop artists are pawns who signed a contract binding them to the elite and requiring them to do their bidding. Most readers of this site know this already, but there is growing push in mainstream media to discredit ‘conspiracy theories’ by writing stuff like ‘Look at these idiots who think that Beyonce is part of an 18th century secret society’.”

The conclusion reached in article recognizes new trend or “tactic” used by mainstream to directly discredit alternative media. The present writer views it as a sign of progress, as consultants and survey firms, possibly, have advised mainstream players they’re losing credibility and ground to upstart alternative outlets? But alas, VC reminds there may be less threat to an entrenched mainstream media as long as they can put children in front of an audience:

“The mass media coverage of Beyoncé’s Illuminati hand sign, also reflects a new trend: Mass media are now directly addressing, discrediting and ridiculing ‘conspiracy theories’ (I hate that term) in order to make sure that people do not start thinking too much about the strange things they are witnessing on TV. Media coverage of Sandy Hook also followed that trend as several TV personalities went on air to ‘debunk’ the theories. Fortunately for the powers that be, most people still teared up when they saw the Sandy Hook chorus standing in the middle of the SuperDome, singing about how America is beautiful. Yes, America is beautiful, but the elite that run it, and who exploit people’s lives and emotions to push their own Agenda, is most definitely not.”

The present writer can only hope people recognize transparent manipulations they are subjected by mainstream media!