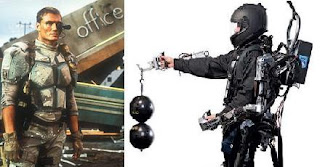 The concept of a Super Soldier, according to Wikipedia, has been around for some time in fiction. Wikipedia implies in a single entry real applications have not met with much success, “in the book The Men Who Stare at Goats, journalist Jon Ronson documents how the U.S. government repeatedly tried and failed to devise super-soldiers with psychic powers.” Duncan O’Finioan, a real life Super Solder with psychic abilities in a Project Camelot interview, relates his grooming from a young age. O’Finioan is an example to support reality of  Super Soldiers. An article at The Independent, “‘Super soldiers’: The quest for the ultimate human killing machine,” revisits idea with new information and a subtitle, suggesting goal is to mute those qualities that make us human!

“Generals not only want stronger, more alert and less stressed soldiers; they want smarter ones, too. One of the most bizarre neuroscience findings in recent years is that by immersing the human brain in a powerful magnetic field, its powers of reasoning and learning are almost magically enhanced. No one knows exactly how ‘transcranial magnetic stimulation‘ (TMS) works, but the Australian neuroscientist Professor Allan Snyder believes that magnetic fields in some way ‘switch off’ the higher levels of mental processing that normally cloud our thoughts, allowing a ‘pure’ form of reasoning to take over,” according to the article. A prudent warning is given at the end of the article, all the effort may backfire to produce a less capable zombie. This suggests to readers the Super Soldier is in a developmental phase and not introduced into live action. The O’Finioan case supports idea, the Super Solider has been in service, at least, since Vietnam!

A 2008 Time magazine article, “Can the Enemy Build a Super-Soldier?“, the title providing time-tested and tired rationalization that we need to build one! Its crazy circular logic is a ploy used to justify virtually anything. Sleep and nutrition are subjects of contention, in this article, implying desire for soldiers who need little sleep or anything to eat! It sounds wonderful or is it wunderbar? A 90-page document by JASON scientists assessing, “Human Performance,” gives readers an idea of immense effort involved! It’s a must read for anyone. You may want to know why your boyfriend seems bionic, there’s the possibility, he is!

The grimmest result of this push towards Super Soldiers, would be, remote guidance or control of a human being. It makes perfect sense from the perspective of managing war by reducing costs. An individual with no parents or social security number seems a plausible path towards that goal. It’s not a pretty prospect!