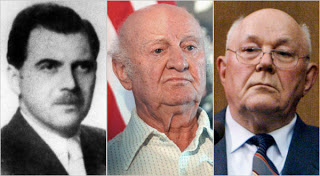 surprise: nazis were given ‘safe haven’ in US, report says

from nytimes: A secret history of the United States government’s Nazi-hunting operation concludes that American intelligence officials created a “safe haven” in the United States for Nazis and their collaborators after World War II, and it details decades of clashes, often hidden, with other nations over war criminals here and abroad.

The 600-page report, which the Justice Department has tried to keep secret for four years, provides new evidence about more than two dozen of the most notorious Nazi cases of the last three decades.

It describes the government’s posthumous pursuit of Dr. Josef Mengele, the so-called Angel of Death at Auschwitz, part of whose scalp was kept in a Justice Department official’s drawer; the vigilante killing of a former Waffen SS soldier in New Jersey; and the government’s mistaken identification of the Treblinka concentration camp guard known as Ivan the Terrible.

The report catalogs both the successes and failures of the band of lawyers, historians and investigators at the Justice Department’s Office of Special Investigations, which was created in 1979 to deport Nazis.

Perhaps the report’s most damning disclosures come in assessing the Central Intelligence Agency’s involvement with Nazi émigrés. Scholars and previous government reports had acknowledged the C.I.A.’s use of Nazis for postwar intelligence purposes. But this report goes further in documenting the level of American complicity and deception in such operations.