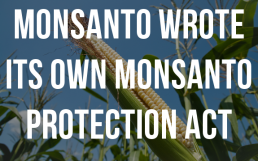 from naturalsociety.com: It should come as no surprise to many of you to find out that Monsanto actually authored the wording of its own Monsanto Protection Act (Sec. 735) hidden in the recently passed and signed Continuing Resolution spending bill. How could a major corporation write its own laws and regulations, you ask?

Quite frankly I think it’s important to understand that the entire Senate passed the bill containing the Protection Act, but the politician who actually gave Monsanto the pen in order to write their very own legislation is no others than Roy Blunt — a Republican Senator from Missouri. As the latest IB Times article reveals, the Missouri politician worked with Monsanto to write the Monsanto Protection Act. This was confirmed by a New York news report I will get to shortly.

As you probably know I do not play the political clown game of left verses right, and instead highlight corruption and wrongdoing wherever it is found — regardless of party affiliation. In the case of Senator Blunt, he admits to colluding with Monsanto, a corporation that has literally been caught running ‘slave-like’ working conditions in which workers are unable to leave or eat (among many worse misdeeds).

Food Democracy Now, a major activist organization that organized signatures to fight the Monsanto Protection Act, described the rider: “The Monsanto Protection Act would force the USDA to allow continued planting of any GMO crop under court review, essentially giving backdoor approval for any new genetically engineered crops that could be potentially harmful to human health or the environment.” Sounds like a great idea, right?