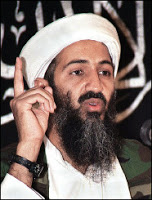 from wake up from your slumber: Rita Katz and her staff of ONE at her Search for International Terrorists Entities (S.I.T.E.) announced on Monday, 11/26 to have knowledge of another Bin Laden message forthcoming, according to the Middle East Times.

One has to wonder what incarnation of Bin Laden Rita Katz and S.I.T.E. will dream up this time. Will BL still have his beard dyed? What version of BL will Rita Katz show to the public or will S.I.T.E. only release an audio tape?

The last release from "Bin Laden", courtesy of S.I.T.E., was around 9/11/07. About the same time the war criminals at large in the Bush/Cheney administration were trying to get more tax dollars for their SURGE plan.

One has to wonder what current events the Bush White House and its media arm known as S.I.T.E. are trying to distract the public from this time?

Their good buddy in the Senate, Trent Lott, resigning suddenly? Or the crashing to the ground economy? Or the recent revelations about more Bush lies from the former WH Press Secretary, Scott McClellan?

Most likely, this latest BL tape from Rita Katz and S.I.T.E. is timed to influence or even disrupt the so-called "Summit" of ME nations at Annapolis. And will provide kindling for the next ME fire Bush and Cheney are wanting to start, this time in Iran.

Since Rita Katz and her staff of ONE at S.I.T.E., Josh Devon, do such a bang-up job of gathering intelligence that the combined spy agencies of the U.S. can't seem to do, even with their plus $50 BILLION dollars budget, we should just fire the CIA and NSA and let Rita Katz and S.I.T.E. take over intelligence gathering operations.

P.S. Try googling "As-Sahab" and see if you can find this site on the web. I can't. An interesting side note is that when you do goggle As-Sahab, you'll notice that there are only 91,700 hits???

That doesn't seem like many hits for a so-called world wide conspiracy that has followers with possible numbers in the millions.