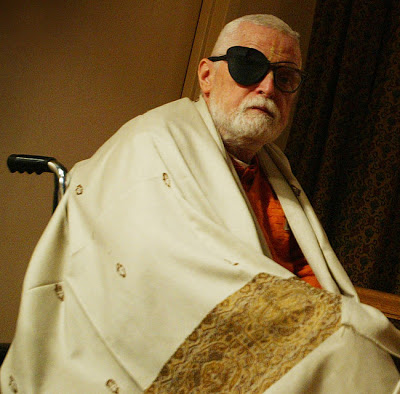 from nytimes: Swami Bhaktipada, a former leader of the American Hare Krishna movement who built a sprawling golden paradise for his followers in the hills of Appalachia but who later pleaded guilty to federal racketeering charges that included conspiracy to commit the murders-for-hire of two devotees, died on Monday in a hospital near Mumbai, India. He was 74. The cause was kidney failure, his brother, Gerald Ham, said.

Mr. Bhaktipada, who was released from prison in 2004 after serving eight years of a 12-year sentence, moved to India in 2008. The son of a Baptist preacher, Mr. Bhaktipada was one of the first Hare Krishna disciples in the United States. He founded, in 1968, what became the largest Hare Krishna community in the country and presided over it until 1994, despite having been excommunicated by the movement’s governing body.

New Vrindaban eventually comprised more than 4,000 acres — a “spiritual Disneyland,” its leaders often called it — with a live elephant, terraced gardens, a swan boat and bubbling fountains. A major tourist attraction, it drew hundreds of thousands of visitors in its heyday, in the early 1980s, and substantial annual revenue from ticket sales.

The baroque frenzy of the place stands in vivid contrast to the founding tenets of the Hare Krishna movement.