swine flu pandemic: the stand & the happening right at your door

"The first case was seen in Mexico on April 13. The outbreak coincided with the President Barack Obama’s trip to Mexico City on April 16. Obama was received at Mexico’s anthropology museum in Mexico City by Felipe Solis, a distinguished archeologist who died the following day from symptoms similar to flu..." 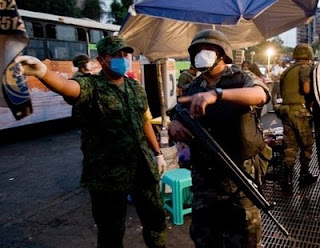 from paul joseph watson: Swine flu panic is spreading in Mexico and soldiers are patrolling the streets after it was confirmed that human to human transmission is occurring and that the virus is a brand new strain which is seemingly affecting young, healthy people the worst, and that the bug is a never-before-seen intercontinental mixture of human, avian and pig viruses from America, Europe and Asia.

Clues that the virus may be a synthetic creation are already manifesting.

According to reports, the virus is a “never-before-seen form of the flu that combines pig, bird and human viruses” which consists of an intercontinental mix of viruses from North America, Europe and Asia.

“CDC officials detected a virus with a unique combination of gene segments that have not been seen in people or pigs before,” according to an Associated Press report.

Alarming reports are now filtering in about people catching the illness who have had no contact with pigs whatsoever. These include a man and his daughter in San Diego County, a 41-year-old woman in Imperial County and two teenagers in San Antonio, Texas. In fact, in all U.S. cases, the victims had no contact with any pigs.

Dr. Wilma Wooten, San Diego County’s public health officer, told KPBS “We have had person-to-person spread with the father and the daughter,” says Wooten, “And also with the two teenagers in Texas, they were in the same school. So that also indicates person-to-person transfer.”

“Dr. Wooten says it’s unclear how people were exposed to swine flu. She says none of the patients have had any contact with pigs,” according to the report.

Although the situation in the U.S. looks under control, panic is spreading in Mexico, where 800 cases of pneumonia in the capital alone are suspected to be related to the swine flu and the virus has hit young and healthy people, which is very rare with an flu outbreak. Despite the danger of a pandemic, the U.S. border with Mexico remains open.

“Mexico has shut schools and museums and canceled hundreds of public events in its sprawling, overcrowded capital of 20 million people to try to prevent further infections,” reports Reuters.

“My level of concern is significant,” said Dr. Martin Fenstersheib, the health officer for Santa Clara County. “We have a novel virus, a brand-new strain that’s spreading human to human, and we are also seeing a virulent strain in Mexico that seems to be related. We certainly have concerns for this escalating.”

The WHO insists that the outbreak has “pandemic potential” and has been stockpiling supplies of Tamiflu, known generically as oseltamivir, a pill that can both treat flu and prevent infection, according to officials. 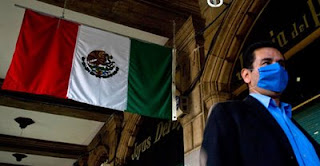 As we previously highlighted, those that have a stake in the Tamiflu vaccine include top globalists and BIlderberg members like George Shultz, Lodewijk J.R. de Vink and former Secretary of Defense Donald Rumsfeld. Indeed, Rumsfeld himself played a key role in hyping an outbreak of swine flu back in the 1976 when he urged the entire country to get vaccinated. Many batches of the vaccine were contaminated, resulting in hundreds of sick people and 52 fatalities.

The fact that the properties of the strain are completely new, that the virus is spreading from people to people, and that the young and healthy are being hit worst, has disturbing parallels to the deadly 1918 pandemic that killed millions.

It is unclear as to why, if the virus is a brand new strain, that public health officials are so confident programs of mass vaccination, which are already being prepared, would necessarily be effective.

It certainly wouldn’t be the first time that deadly flu viruses have been concocted in labs and then dispatched with the intention of creating a pandemic.

When the story first broke last month, Czech newspapers questioned if the shocking discovery of vaccines contaminated with the deadly avian flu virus which were distributed to 18 countries by the American company Baxter were part of a conspiracy to provoke a pandemic.

Since the probability of mixing a live virus biological weapon with vaccine material by accident is virtually impossible, this leaves no other explanation than that the contamination was a deliberate attempt to weaponize the H5N1 virus to its most potent extreme and distribute it via conventional flu vaccines to the population who would then infect others to a devastating degree as the disease went airborne.

However, this is not the first time that vaccine companies have been caught distributing vaccines contaminated with deadly viruses.

In 2006 it was revealed that Bayer Corporation had discovered that their injection drug, which was used by hemophiliacs, was contaminated with the HIV virus. Internal documents prove that after they positively knew that the drug was contaminated, they took it off the U.S. market only to dump it on the European, Asian and Latin American markets, knowingly exposing thousands, most of them children, to the live HIV virus. Government officials in France went to prison for allowing the drug to be distributed. The documents show that the FDA colluded with Bayer to cover-up the scandal and allowed the deadly drug to be distributed globally. No Bayer executives ever faced arrest or prosecution in the United States.

In the UK, a 2007 outbreak of foot and mouth disease that put Britain on high alert has been originated from a government laboratory which is shared with an American pharmaceutical company, mirroring the deadly outbreak of 2001, which was also deliberately released.

As we reported yesterday, last time there was a significant outbreak of a new form of swine flu in the U.S. it originated at the army base at Fort Dix, New Jersey.