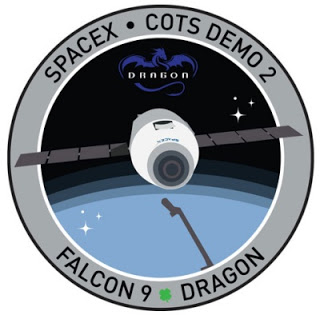 Bob Schlenker, at The Open Scroll Blog, decodes occult symbolism of the Space Dragon mission patch. Schlenker simply points out what is right in front of us: "It's an eye of Horus with the concentric rings forming the eye. The exposed docking port on the Dragon has concentric rings, the dot-in-circle target sun wheel, the ubiquitous symbol of the sun god Horus. The Hermetic Maxim is signaling 'as above so below' with a division made by the Dragon solar wings plus the two triple star constellations appearing in the heaven and on the earth. Three arched bands suggest the atmospheric layers of the earth and suggest the triple helix DNA of the successful reproductive mission joining the heavenly and earthly. Since the receiver port is on the male, an argument could easily be made for the sodomite portal perspective. The arched bands also represent a spectrum of the rainbow, which I've given some coverage recently in the Rango series as the symbol of trans-dimensional portal technology. The Dragon is pictured on near approach to ISS, with what I think is the docking boom in sight. Anticipation."

Schlenker does such a wonderful job breaking down symbolism a reader feels almost embarrassed it's made so obvious! The blog entry breaks down the entire message as the Falcon 9/Dragon appears at launch: 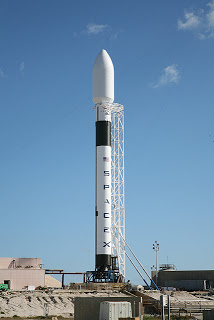 "Consider the connotation of a rocket as a phallus. The stylized text of the SpaceX name logo presents the letter X as a combination X and Y to signal a chromosome, a gamete or sex chromosome. What would be the letter A is missing a piece such that a letter y actually appears, tilting left. As a y (male) chromosome, we get it: The rocket is male and reproductive."

"You can't have sexual reproduction without the mother. She would be what the Dragon will dock with to deliver the payload, the International Space Station. This is more commonly referred to as ISS, I-S-S, like ISIS! The intent here is obvious."

"The Dragon is the Osiris object that sits with the Falcon on the launch pad like an obelisk. This is the same Egyptian sex magick at work at the Vatican and in Washington DC between the obelisks and domes. The dynamic of the obelisk and dome operates on the power of the sun, like the Dragon with its solar wings as it mounts ISS and delivers the payload. Space-Sex. Makes sense to me."

Have you noticed the broken A on the Falcon 9 rocket? The Open Scroll Blog is nothing less than a treasure for de-masking occult symbolism. Hats off to Schenkler! Yes, it's Space-Sex and seems obvious, now!