Systems All Go For Space X Launch On May 19 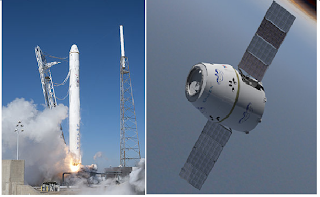 Space X will launch first commercial rocket on May 19 from Cape Canaveral.  Universe Today article describes event: "In less than 48 hours, SpaceX is primed to make history and launch...spacecraft to the International Space Station (ISS) early Saturday morning on May 19...The SpaceX developed Dragon cargo resupply spacecraft (picture, right) is bolted on top of the two stage Falcon 9 rocket and stands 157 feet tall for the mission dubbed “COTS 2”. The Falcon 9 booster (picture, left) generates 1 million pounds of thrust ...The purpose of Dragon is to carry supplies up to orbit and dock at the ISS and partially replace the capabilities of NASA’s now retired space shuttle. Dragon is a commercial spacecraft designed and developed by SpaceX. "

It seems a wonderful achievement replacing wasteful government with efficiencies of a corporation? Is it truly for the best? What can a corporation conceal where government would have to disclose? Is it really much different than privatizing the military? The present writer believes a healthy skepticism should be taken when it comes to managing the affairs of space!  It will be as easy as attaining your GPS coordinates from your enabled cell phone to put you in the crosshairs!