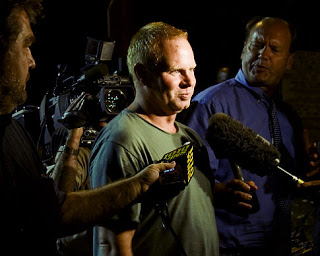 slater emerges from jail, basks in new status as celebrity

from washington post: Steve Slater, you may have had enough of your job, but people can't get enough of you. Disgruntled workers of the world have united behind you. Flight attendants walk a little taller thanks to you. And now, musicians are playing tribute to you. Here are three ballads about the man who jumped outta his job via an emergency slide. Let us know in the comments which tribute is your favorite. Jimmy Fallon broke it down for his audience last night with the catchy chorus of "He took two beers and jumped... You gotta get two beers and jump." ... Rachel Glassberg sings, "See you later, Steven Slater, you're a first-class hell raiser."