from ap: A new book by a former employee of Alcor, the company that froze Ted Williams‘ remains, alleges the baseball Hall of Famer’s body was mistreated by the company.

Larry Johnson says in the book “Frozen: My Journey Into the World of Cryonics, Deception and Death” that he watched an Alcor official swing a monkey wrench at Williams’ frozen severed head to try to remove a tuna can stuck to it. The first swing accidentally struck the head, Johnson contends, and the second knocked the tuna can loose.

“Alcor denies allegations reported in the press that there was mistreatment of the remains of Ted Williams at Alcor,” the company said. “Alcor will be litigating this and any other false allegations to the maximum extent of the law.” 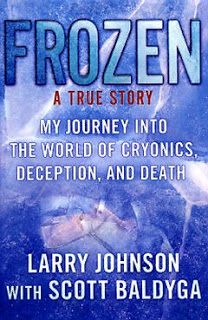 Johnson says he worked for Alcor for eight months in 2003, first as clinical director then as chief operating officer. He included several photographs in the book, including one of an upside down severed head, not Williams’, that had what appeared to be a tuna can attached to it.

Johnson says Alcor used the cans, from a cat that lived on the premises, as pedestals for the heads…

Johnson, who says he wired himself surreptitiously the last few months of his employment, was the source for a story in Sports Illustrated in August, 2003, that said Williams’ head had been severed and damaged.