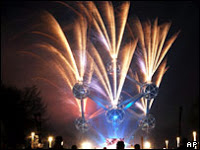 from bbc: Traditional New year's Eve fireworks in the Belgian capital Brussels have been cancelled because of a security alert.

The Christmas market will close at 1800 instead of staying open all night, and even the ice rink will close early.

"We are still facing a potential threat," a spokesman for the Belgian capital said.

The alert follows police saying they had discovered a plot to free a jailed al-Qaeda suspect, Nizar Trabelsi. He has denied any such plot.

Last week police detained 14 people suspected of taking part in the alleged plot. But a judge said there was not enough evidence to hold any of them.