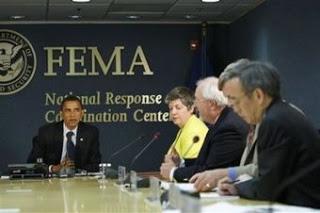 Why is FEMA trying to cover up National Level Exercise 2010? 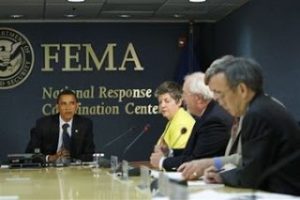 from public intelligence: Public Intelligence has received a request from FEMA to remove a “For Official Use Only” document regarding the National Level Exercise 2010 (NLE 10), which was scheduled for this coming May.  The exercise was to be based on National Planning Scenario 1 which simulates a nuclear detonation in a U.S. city.  However, recent political pressure has led to the exercise being “scaled back” according to the Washington Post, Christian Science Monitor and a variety of other publications.  At the behest of Senator Harry Reid (D-NV), the exercise’s Nevada events have reportedly been canceled and the FEMA website now shows no mention of NLE 10.

On top of this, the Obama administration has recently been emphasizing the threat of a domestic nuclear attack. President Obama’s remarks at the Nuclear Security Summit on April 13, 2010 emphasize that the threat of terrorists using nuclear weapons inside of major metropolitan cities is one of the “greatest threats” that the world faces: "Terrorist networks such as al Qaeda have tried to acquire the material for a nuclear weapon, and if they ever succeeded, they would surely use it. Were they to do so, it would be a catastrophe for the world - causing extraordinary loss of life, and striking a major blow to global peace and stability. In short, it is increasingly clear that the danger of nuclear terrorism is one of the greatest threats to global security - to our collective security."

NLE 10 concerned itself with exactly this scenario: the detonation of a nuclear device inside of a U.S. city.  Las Vegas was to be the epicenter of this hypothetical attack and, if the exercise utilized the same circumstances as National Planning Scenario 1, it would have involved “hundreds of thousands” of casualties, more than 300,000 refugees and ultimately more than 1 million displaced persons.

The unpopularity of such a scenario, regardless of its security benefits, is obvious.  What is strange is the attempt that is now being made by FEMA to eliminate references to the exercises and remove from circulation a document that has played an important role in drawing attention to the exercise.  As the state of NLE 10 is unclear at the moment, it is difficult to say whether the request is truly motivated by security or whether there is a more dubious intention.

9/11 connected L-3 designed NLE10 nuke detonation drill, Zakheim's Booz-Allen-Hamilton also involved
from of goats & men: From their own website we can read how L-3 Global Security & Engineering Solutions, a division of L-3 Communications, got the contract to "provide exercise support in design, development, conduct, and evaluation of NLE2010, the nation’s largest annual Tier 1 operations-based exercise."

According to Wayne Madsen "a long-time L-3 Communications consultant for the National Security Agency (NSA) was, according to our source, one of the very few recipients of the live video stream that caught the first plane hitting the North Tower." L-3 was also one of the corporations "flagged by the SEC" as having been traded suspiciously before 9/11.  Another corporation involved in the exercises, Bridgeborn, describes the exercises in a press release. Public Intelligence has published a copy of an overview of the exercises which Fema has asked be taken down.

Another corporation involved with NLE 2010 according to the L-3 article, is Booz Allen Hamilton, owned by the Carlyle Group. Joan Dempsey, top assistant to CIA Director George Tenet, said "I like to call Booz Allen the Shadow IC." IC is short for 'Intelligence Community.' Booz Allen Hamilton has notable members including Dov Zakheim, who is a vice president there. Zakheim was the Pentagon controller when the Trillions went missing the day before 9/11, is a PNAC signatory, contributed to the PNAC Rebuilding America's Defenses article and is mentioned by some as a mastermind of 9/11 for his work as a CEO of Systems Planing Corporation which works on fly-by-remote systems for aircraft. It is also mentioned on several websites that Booz Allen was a client of Blessed Relief, the charity said to be a front for Osama Bin Laden. 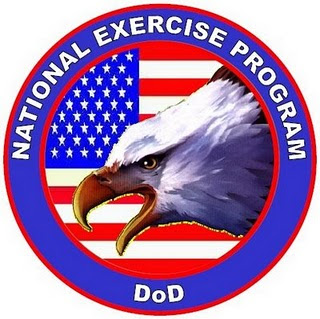 from not another conspiracy: The simulation of a nuclear bomb being detonated by terrorists in an American city, with 10,000 emergency responders, U.S. troops and officials playing out their roles in the heart of Las Vegas has been canceled. The reason: Senate Majority Leader Harry M. Reid (D-Nev.), backed by casino and business interests, said it would frighten away tourists and "unacceptably harm" the region's battered economy.

The simulation / exercise "Golden Phoenix" appears at this time to be headed to Los Angeles Los Angeles County, in June that simulates the detonation of a 10-kiloton nuclear device.

See also- DHS/Fema NLE Calender 2009-2014: Here's the Information pertaining to the Department of Homeland Security & Federal Emergency Management Agency planning cycle / schedule for the rest of 2009 through 2014 for the National Exercise Program. These are the same kind of exercises that were being conducted on 9/11 in the United States of America which went live. Other nations have conducted exercises in the past which also went live.

Keep in mind that the NLE programs are not set in stone and are subject to change. All of this information has been UN classified.