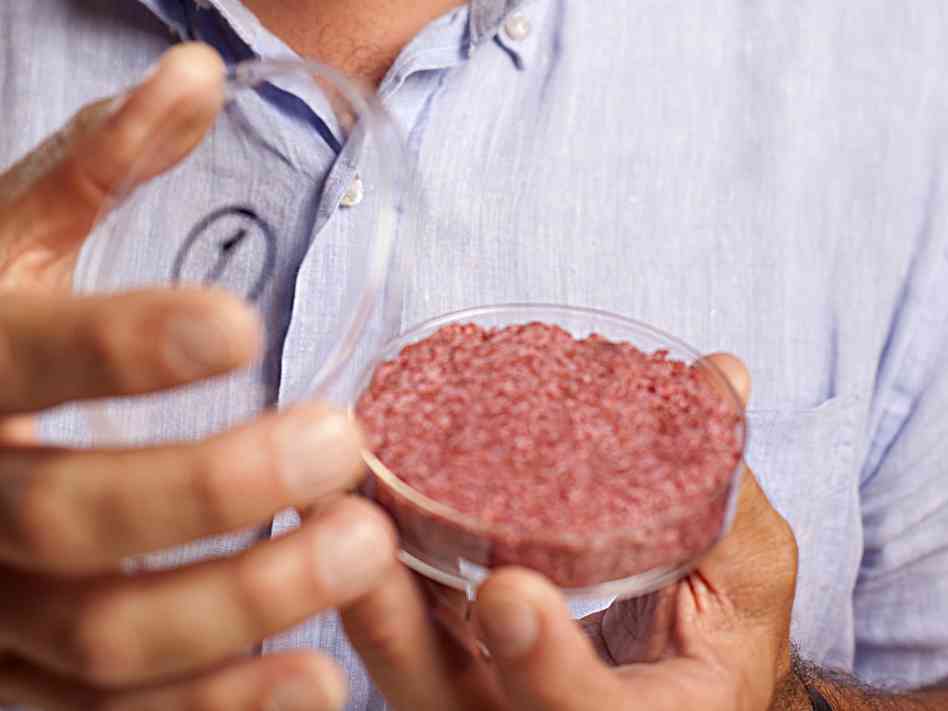 from skynews.com: The world's first test-tube burger, costing a whopping £250,000 to produce, has been unveiled in London.


The 5oz patty - made from lab-grown "cultured beef" - was dished up by
its creator, Professor Mark Post, before journalists in Hammersmith, in
the west of the capital.


The scientist-turned-chef made the most expensive beefburger in history
from 20,000 tiny strips of meat grown from cow stem cells over a
three-month period.


The billionaire co-founder of Google, Sergey Brin, put £215,000 of his
own money towards the research, saying he was doing it because it could
be "transformative for the world".

Chef Richard McGeown fried the burger in sunflower oil and a knob of
butter before it was sampled by Josh Schonwald, author of The Taste of
Tomorrow, and food scientist Hanni Rutzler.


Ms Rutzler said it was "close to meat" but she was expecting the texture to be softer and it wasn't very juicy.


Mr Schonwald said the "absence is the fat ... it's a leanness to it but the bite feels like a conventional hamburger".


"This is kind of an unnatural experience in that I can't tell you over
the past 20 years how many times I have had a burger without ketchup or
onions or jalapenos or bacon."


Prof Post believes his artificial meat - known by the rather
unappetising title "in-vitro meat" - could herald a food revolution and
appear in supermarkets within the next 10 to 20 years.

After trying his own creation for the first time, he said: "I think
it's a very good start, it proved that we can do this, that we can make
it and to provide a start to build upon - I am very pleased with it."


He said he was not worried about the verdict on the taste and added
that in a couple of months they should be able to add fat into the
product.


The burger could help save the planet by cutting the billions of tonnes
of greenhouse gases currently released by livestock, and may also be
deemed ethically acceptable by vegetarians because it would dramatically
reduce the need to slaughter animals.


But its success or failure will ultimately depend on how much it resembles the taste, texture and price of real meat.

The demonstration was originally planned for October last year, with
celebrity chef Heston Blumenthal cooking the burger for a mystery guest.


There was pressure from journalists in the audience who wanted to try
the burger but they were told there was not enough to go around.


Up until now, the only outsider known to have eaten the synthetic meat
was a Russian reporter who snatched a piece of cultured pork and stuffed
it in his mouth during a visit to Prof Post's lab - before it had been
passed as safe to eat.


He was reportedly unimpressed by the pork, describing it as "chewy and tasteless".


Prof Post's team at the University of Maastricht in the Netherlands
conducted experiments which progressed from mouse meat to pork and
finally beef - the most environmentally destructive meat.

"What we are going to attempt is important because I hope it will show
cultured beef has the answers to major problems that the world faces,"
he said.


"Our burger is made from muscle cells taken from a cow. We haven't
altered them in any way. For it to succeed it has to look, feel and
hopefully taste like the real thing."


The ingredients don't sound like something a chef would boast about on a
menu - half-millimetre thick strips of pinkish yellow lab-grown tissue,
each the size of a rice grain.


But Prof Post is confident he can produce a burger that is almost indistinguishable from one made from prime beef.


He points out that livestock farming is becoming unsustainable, with demand for meat rocketing around the world.


The industry accounts for nearly 20% of all greenhouse gas emissions -
even greater than transport - with 228 million tonnes of meat produced
each year.


And the environmental problems are only likely to get worse, with the
UN forecasting that world demand for meat will double by 2050, largely
driven by an increased demand from a growing middle class in China and
other developing nations.

Added to this, around 70% of all farmland is devoted to meat
production, and cattle consume around 10% of the world's freshwater
supplies, making meat farming a very costly, planet-damaging business.


Experts say 1kg of meat requires up to 10kg of crops to produce, making
it a highly inefficient method of turning plants into human food,
whereas synthetic meat uses about 2kg of feed.


Research by Oxford University scientists in 2011 estimated that
cultured meat needs 99% less land than livestock, between 82% and 96%
less water, and produces between 78% and 95% less greenhouse gas.


The burger launched today has cost  £250,000 to produce, but the Dutch
team are hoping to dramatically slash the cost by industrialising the
laborious process.


The Food Standards Agency said that before going on sale, synthetic
meat would need regulatory approval, with manufacturers needing to prove
that all necessary safety tests had been carried out.