thank you but our terrorist is in another castle 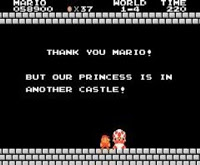 from the talent show: I’ve been saying for years that those Ataris and Nintendos are the cause of violence, but you fools weren’t listening. Now the video game threat has reached our shores:

FBI agents say one of the six men accused of planning a shooting spree at Fort Dix conducted surveillance at several military installations.

According to a complaint, nearby Lakehurst Naval Air Station, Dover Air Force Base in Delaware and a Coast Guard building on Delaware Avenue in Philadelphia were cased in August 2006.

The FBI says it also tailed the suspect to Fort Monmouth.

Prosecutors say the suspect told an informant he settled on Dix because co-defendant Serdar Tatar delivered pizza to the post for Super Mario’s Pizza Restaurant in New Hanover Township.

From what sources are telling me, the Fort Dix terrorists were dangerously close to getting their hands on advanced flame-throwing technology.

from kurt nimmo: According to the FBI, the United States “dodged a bullet” — or maybe extra cheese and Italian sausage — thanks to paid informants who apparently had little trouble penetrating the group and videotaping them. “What we witnessed here was a brand new form of terrorism,” that is to say terrorist plots cooked up in pizza delivery joints by delusional patsies who apparently believed it was possible to attack a military installation with weapons to be provided by “a confidential government witness.”