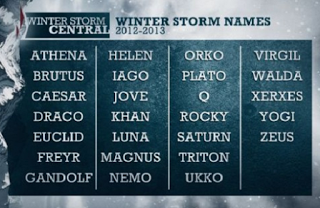 Zen Gardner exposes occult significance of storm naming in blog,"The Bizarro Occult World of Storm Naming." Gardner comments in a jaded sarcastic tone on The Weather Channel practice of providing names to winter storms: "I guess they might as well name them since they’re all basically creations of the geo- engineering weather department. Besides, give ‘em a personality and you can drive up ratings as well as scare the crap out of people more easily." Chemtrails are obliquely referred to in use of term geoengineering, so everything in Gardner's estimation, including weather, are not "acts of nature" as we've all grown up to believe!  Gardner, also points out, it seems suspect to apply names to winter storms and may mislead public!

What cannot be underestimated are the power of names!   Gardner comments variously on power behind applying names below:

"The practice of Naming is one of the most sacred acts in human history....names have serious psychological and spiritual significance. Remember 'name calling' as a kid? Why was that so effective? A kind of primordial weapon, but somehow we knew how powerful names were...
Naming something or someone gives a sense of dominion...This is also part of the reason they name aggressions and war programs. It gathers spiritual focus and momentum...We’re led by the nose via false labeling and catchy conceptualizations...Clearly, named societal trends are spiritual at the least. Who knows how these behind the scenes manipulators decide these things, but we know they’re compromised and they’re strangely anti-human. Why reference mythological beings or galactic bodies? What is at work here?"

The present writer would respond to Gardner's likely rhetorical question with answer mythological beings and galactic bodies have likely an occult significance.   The above names for winter storms also likely have occult meaning, at least, with names Saturn and Zeus.  .  You may also wonder why weather forecasts aren't better?  Gardner suggests, "... the weather can not just be manipulated, but falsely reported as part of the charade, is way beyond most people’s sleepwalking cycle...It’s all a power play. And an age old, occult oriented one at that."
Gardner may seem overwrought and out in left field to the casual observer?  The present writer believes Gardner is much closer to truth than average person can ever realize!