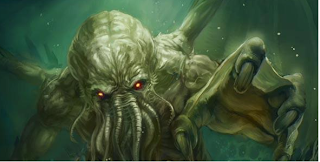 How much does cult mythos influence our reality?  It's worth pondering as you listen to You Tube reading, "The Call Of The Cthulhu," a 1926 short story by H.P. Lovecraft. You may read along while listening with print version here.  Find out what the Cthulhu mythos is all about at summeroflovecraft.com:

"In the eponymous story and later works, Lovecraft reveals CTHULHU is a monstrous deity exiled to Earth from its place amongst the Elder Gods. CTHULHU has dwelt for ages in a tomb within the corpse-city of RL'YEH, somewhere beneath the waves of the Pacific Ocean. While technically dead, its remains do not wither under the ravages of aeons, whence comes the infamous couplet:

'That is not dead which can eternal lie / After strange aeons even death may die.'
CTHULHU's caretakers are the reptilian demigods DAGON and HYDRA, whose children, the Deep Ones, take human mates to further a breeding program intended to manage the human race for CTHULHU's purposes."

"Shreds of mighty CTHULHU's consciousness still cling to its corpse and influence the dreams of lesser beings such as mankind. Its nightmares have been known to drive the dreamer to madness. It is said that when the stars are right, CTHULHU's soul will be returned to its body, RL'YEH will surface from beneath the waves, and the Great Old One will rise again to devour the souls of all life on Earth. Many ills have been attributed to the influence of CTHULHU on man's dreams: Nazism, Satanism, the Process Church, Jonestown, Branch Davidianism, Madison Avenue, trailer homes, televangelists, infomercials, "Three's Company" re-runs, spam...

Interestingly, translations of Sumerian tablets dealing with sorcery and magic recovered from sites in Mesopotamia make reference to a subaquatic deity or power known as "KTULU". Coincidence?"