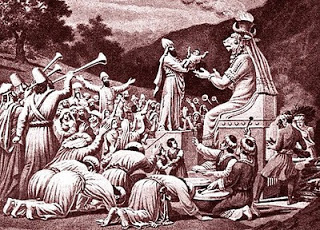 The End of April: A Time of Human Sacrifice

The End of April, whether coincidence or not, appears to be two week celebration period in preparation for Beltane.  Vigilant Citizen (VC) recaps history of Baal worship Beltane is derived below:

"The origins of the Beltane festival can be traced back to the celebration of the Sumerian God Enlil – who is known to us as Baal. The name Beltane (pronounced “B’yal-t’n”) is said to originate from the word Baal. Celebrations of the Beltane festival are very similar to ancient rituals celebrating the ancient god. The mysterious similarities between these seemingly distant cultures could be the subject of an entire article. One thing is for sure: Baal is an important figure in Illuminati lore."

In current article, "The End of April: A Time of Human Sacrifice," VC suspects elite conduct mass sacrifices, where public becomes unwitting participants in occult ritual.  The latest tragedies in Boston and Texas continue a deadly trend at the end of April.   VC observes:

"Those who know about occult calendars enter the second half of April wondering if something horrific is about to happen. Sadly, every few years, it does, and the public is traumatized with a senseless and violent event. Almost every time, a closer look at the event leads to strange and suspicious facts, and, more often than not, hints towards an inside job. While many will ascribe the occurrence of these events during the end of April to coincidence, the fact remains: Mass violent events involving death and fire happen regularly during the same time period that is occultly dedicated to Baal, who is worshipped through fire and human sacrifice. Whether this is all done on purpose or just the result of some crazy universal synchronicity, the fact is still there and cannot be disputed. Incidentally, the compound that was burned down in the 1993 Waco Massacre was named Mount Carmel Center. In the Bible, Mount Carmel was where Elijah defied the prophets of Baal, challenging them to pray to Baal until he lit a fire in front of them. No fire was lit. Was the fire at Mount Carmel Center a symbolic revenge of Baal?"

"The powers that be have become masters at combining pragmatic politics with occult rituals," concludes VC. The Baal cult never disappeared, summarizes VC, reminding reader:  "Throughout many centuries and across many civilizations, the second half of April has always been a time of blood sacrifice. The worship of Baal took many names (Enlil, Molech, etc.) and spread across several civilizations. Being a sun god and a god of fertility, rituals celebrating Baal took place after the vernal equinox (a time of rebirth) and often involved human sacrifice."