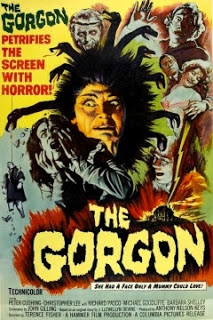 The Halloween season inspires horror and Holy Hexes invites you to view, "The Gorgon,"a 1964 feature starring Peter Cushing and Christopher Lee. The subject of movie taken from Greek myth of Gorgon - a dreadful female creature with a crown of snakes. Plot summary from You Tube follows: "The year is 1910. In the rural German village of Vandorf, seven murders have been committed within the past five years, each victim having been petrified into a stone figure. Rather than investigate it, the local authorities dismiss the murders for fear of a local legend having come true. When a local girl becomes the latest victim and her suicidal lover made the scapegoat, the father of the condemned man decides to investigate and discovers that the cause of the petrifying deaths is a phantom. The very last of the snake-haired Gorgon sisters haunts the local castle and turns victims to stone during the full moon." The Gorgon - a dreadful myth presented in entertaining fashion below the fold. It's easy to get horrorified - or in this case - petrified, when admission is free!