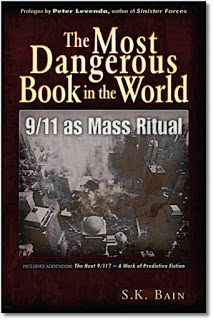 The Most Dangerous Book In The World

S. K. Bain showcases ability as an aggregator of diverse info from numerology to occult symbolism to clearly show 9/11 was a Megaoccult ritual in his work, "The Most Dangerous Book in the World."  The present writer impressed, especially, by observation the World Financial Center  adjacent to the World Trade Center with its pyramid structures, served as a massive ceremonial complex!  Bain places 9/11 squarely in the realm of the occult and supernatural, going beyond terrorism, which fails to supply complete explanation as his book demonstrates so well!   It's a breezy read and a massive shot of occult intelligence!  Bain will immediately raise your Occult Quotient (OQ)!  The prologue written by Peter Levenda, the best writer to provide framework for readers, suggesting supernatural forces at work in our world, where modern man suffering symbolism illiteracy can see only terrorism!  Bain elevates discussion and breaks new ground for 9/11 research!  An informative interview of Bain conducted by Kevin Barrett is available at Truth Jihad Radio! You may want to read before Christmas to be up on possibility raised "in a weighty addendum entitled, The Next 9/11?, Bain moves into the world of speculative fiction. Once again making use of occult symbolism and numerology, he warns of a possible new and even more horrifying act of mass terror, coming this Christmas to Phoenix, AZ, and the rest of the world." The book is a must read!