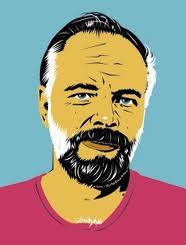 Science Fiction writer Philip K Dick (PKD)  focused on themes that emerged later to become prominent in wider culture since his 1982 death.  PKD themes include illusive subjectivity of reality and "...the pivotally Dickian question, What is real, what is fake? What crucial
factor defines humanity as distinctly 'alive', versus those merely
alive only in their outward appearance?"  A 2007 documentary, "The Penultimate Truth About Philip K. Dick,"  provides rich background of writer and excellent viewing:

"Philip K. Dick is considered by many to be one the world's greatest science fiction writers ever; as a sufferer from mental illness himself he had the ability to turn his hallucinations about the universe into an extraordinary writing career. During his lifetime, Dick produced an astonishing amount of prize winning novels and short stories, which were translated into more than 25 languages. Three of his literary works were transformed into blockbuster movies: Blade Runner, Minority Report and Total Recall."

You may drop below fold to enjoy documentary in nine parts.