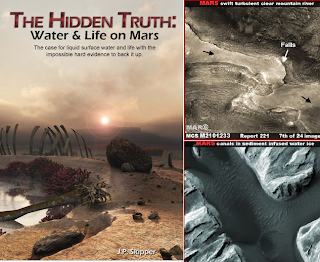 A masterful disinfo campaign has Earthlings convinced Mars is cold barren planet devoid of life with only scant atmosphere.  Joseph P. Skipper, Mars Anomaly researcher, attempts to dispel misconception imposed on public by massive effort to keep secret true conditions on Mars.  The researcher and author succeeds with images in recent entry, "The Real Mars." Skipper describes water cascading over falls (picture, upper right) to continue course down river much like Earth. The second image (lower right) is water and ice. Pictures are from areas in lower latitudes of southern hemisphere of Mars.  You may receive full scoop in Skipper book, "The Hidden Truth:  Water & Life on Mars."

On the surface, it may sound like mere selfishness, but secrecy or withholding truth confirms grave shortfalls in human affairs. Skipper reveals coverup of real Mars "...is based on lies and yet connected to 2+2=4 science, it is possible to turn this around starting with the visual evidence you see here as leverage. If this can happen, then secrecy all over the place will quickly be in trouble and mankind may be able to come out from under this smothering cover of pretense and deception...Because of the deeply ingrained secrecy and as long as it rules, the inaccurate
perception of Mars as a dry dead world may prevail to the point of ...our social destruction."  The seriousness of issue is not lost on Skipper, who believes obfuscation of Mars images, represents a lid on truth. "Martian Sky is Blue" and  "Tracing Canals of Mars" are past blog entries that also suggest - we are not made aware of true conditions on Mars!