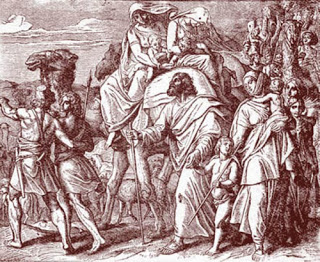 The Wealth and Power of the Biblical Patriarchs

This article was first published in the Winter 2006 issue of Bible and Spade.

Based on the overt descriptions of the Patriarchs’ wealth, some scholars have surmised that they may have been traveling merchants, using donkeys as their chief mode of transport. Sarna observed that the Patriarchs had dealings with kings, possessed slaves, retainers, silver and gold, and might possibly have participated in the international caravan trade (1966:105).
Albright, commenting on a Hebrew word used in Genesis to describe the Patriarchs’ economic activity, stated:

the cognate Old-Assyrian words from the same verbal stem, meaning in the caravan texts clearly “to trade, barter,” and “goods for barter” (Albright, 1983: 13).

Referring to Genesis 14, where Abraham leads 318 of his trained servants into battle, Albright concluded that neither this chapter nor Genesis 23 [in which Abraham purchases land for a considerable sum of money] is intelligible unless we recognize that Abraham was a wealthy caravaneer and merchant whose relations with the native princes and communities were fixed by contracts and treaties (covenants) (1983:15).

This would certainly tie in with Macdonald’s statement that the earliest domesticated camels provided their owners with “a commercial and strategic importance to the rulers of the states around them” (1995:1357).

Of course, Albright may have overplayed his hand, reducing the Patriarchs to nothing more than donkey-riding peddlers. Scholars have rejected the more excessive aspects of Albright’s theory (cf. Couturier 1998: 194, n. 1), noting that the Patriarchal narratives never portray Abraham or his progeny as actually selling anything via their donkey ownership. Nevertheless, the proofs supplied by Albright, as well as the Genesis narrative itself, show that the Patriarchs were wealthy individuals who participated in the sedentary economy of their culture. An objection might be raised that, since Albright considered the Patriarchs to be donkey rather than camel caravaneers, his theory has no bearing on whether the Patriarchs possessed camels.

The Patriarchs’ Use of Camels

Leiman has pointed out that Genesis emphasizes Patriarchal ownership of donkeys, with camels being mentioned only rarely (1967:22). If the Patriarchs were caravaneers at all, then they were almost certainly donkey caravaneers who may have owned a comparatively small number of camels. The possibility that this conclusion is correct is reinforced by the opening verses of chapter 32, in which Jacob reunites with Esau. Before the actual meeting of the two estranged twins, Jacob sends a messenger to Esau with a list of livestock and retainers possessed by Jacob. Camels are not mentioned: “I have cattle and donkeys, sheep and goats, menservants and maidservants” (v.5).

Jacob’s departure for Canaan. “Then Jacob put his children and his wives on camels, and he drove all his livestock ahead of him, along with all the goods he had accumulated in Paddan Aram, to go to his father Isaac in the land of Canaan” (Gn 31:17–18). Author Caesar points out that only the wealthy could afford to own camels in the ancient near east.
Continue reading this interesting article here: http://www.biblearchaeology.org/post/2009/10/14/The-Wealth-and-Power-of-the-Biblical-Patriarchs.aspx#Article