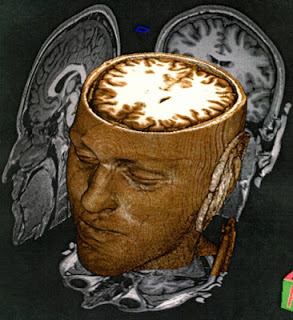 This Is Your Brain On Neuroscience

Does announced ten year Brain Activity Mapping Project (BAM) represent another control matrix in the making?  Will scans be used to ticket offenders for showing too much brain activity?  Will third offense find offender in a futuristic biofeedback headset that reports brain levels to authorities?  Jon Rappoport believes BAM threat to be very real in article, "This Is Your Brain On Neuroscience."  The present writer suspects BAM will survey effectiveness of toxins and poor diet, the primary silent agents used to curb active minds.  Authorities will moderate or incite people as their agenda requires in areas of high interest with ELF, GWEN towers and HAARP.  Rappoport defines foundation of threat below as scientific reductionist view of man himself:

"The soul or spirit or mind are not explainable in physical terms. This is the basic view expressed over and over by philosophies and religions from the dawn of time on this planet. In the 20th century, that view was subjected to the bulldozer of science. The chief implication of scientism is: freedom is an illusion...The rarely expressed neuro-scientific conclusion? We are all robots made out of flesh with no freedom and no 'extra quality' called life."

A strict materialist view of man results in reduction of the mind to simple matter, Rappoport deems view requires a faulty assumption.

The present writer suspects, there's a line where brain activity falls below, and voila, materialist view comes much closer to accounting for man's entire existence! A less active mind and spirit falls prey to robotic existence.  BAM may be used as a further measure of control over mankind with goal to reduce us to biological robot status!

"Under the banner of “improved mental health,” BAM looks benign. But it isn’t. It looks like the way to stop the next James Holmes or Adam Lanza, but it isn’t ...Parameters will be drawn. Any person whose brain registers activity beyond those boundaries will be judged as a danger, a threat. The threat will be curtailed by limiting and diverting neuronal/synaptic processes. Their [medical scientists] major trump card is this. They have, through sheer propaganda, hypnotized a significant percentage of the population into believing that science and research are always good things."

Science represents an attempt to understand nature with resulting corollary, almost always, attempts to control it.  Rappoport sees an escalation in this subtle non-verbal fight for control:

"But if soul and spirit and psyche and freedom do exist (and they do), they will be beyond control, since they are non-material.
Thus, efforts at control will have to be more radical and destructive...And that’s where the gloves come off and the mask comes off. Then we see the real controllers. Far from being sophisticated and subtle and humane guides into our future, they are just the old tyrants in new costumes."

Rappoport righfully concludes, it's the scientists, who represent the danger and they are the ones who should be monitored! The present writer finds it distressing that Rappoport defines this real threat to one's control over their own mind so well; yet, most people remain oblivious.  Here's your ticket for thinking too much - don't let it happen, again!