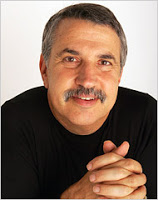 from new york times: Not long ago, the satirical newspaper The Onion ran a fake news story that began like this:

“At a well-attended rally in front of his new ground zero headquarters Monday, former New York City Mayor Rudy Giuliani officially announced his plan to run for president of 9/11. ‘My fellow citizens of 9/11, today I will make you a promise,’ said Giuliani during his 18-minute announcement speech in front of a charred and torn American flag. ‘As president of 9/11, I will usher in a bold new 9/11 for all.’ If elected, Giuliani would inherit the duties of current 9/11 President George W. Bush, including making grim facial expressions, seeing the world’s conflicts in terms of good and evil, and carrying a bullhorn at all state functions.”

Like all good satire, the story made me both laugh and cry, because it reflected something so true - how much, since 9/11, we’ve become “The United States of Fighting Terrorism.” Times columnists are not allowed to endorse candidates, but there’s no rule against saying who will not get my vote: I will not vote for any candidate running on 9/11. We don’t need another president of 9/11. We need a president for 9/12. I will only vote for the 9/12 candidate.

What does that mean? This: 9/11 has made us stupid. I honor, and weep for, all those murdered on that day. But our reaction to 9/11 - mine included - has knocked America completely out of balance, and it is time to get things right again.