could soldiers be prosecuted for thoughtcrime?

from danger room: The Pentagon's Defense Advanced Research Projects Agency is funding a number of technologies that tap into the brain's ability to detect threats before the conscious mind is able to process the information. Already, there is Pentagon-sponsored work on using the brain's pattern detection capabilities for enhanced goggles and super-fast satellite imagery analysis. What happens, however, when the Pentagon ultimately uses this enhanced capability for targeting weapons? This question has led Stephen White to write a fascinating article

(223kb PDF) exploring the implications of a soldiers' legal culpability for weapons that may someday tap into this "pre-conscious" brain activity. 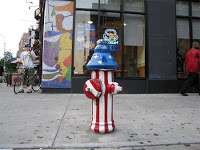 from truthnews: It’s like something dreamed up by East Germany’s Stasi. In Florida, Sheriff Sgt. Ken Sonier “watches those who don’t want to be seen,” according to News-Press. Of course, in a healthy, non-brainwashed society most us would not take kindly to being watched, no matter the reason, but in the post-9/11 world far too many of us have bought into the idea we are somehow obliged to surrender our privacy in order to combat the terrorists, never mind we don’t have a good idea who the terrorists are. Fox News now tells us they have blond hair and blue eyes.

from the australian: Local council bin police wearing head lamps are prowling neighbourhoods in the middle of the night to check whether residents are recycling. At least one contractor hired by the City of Monash in Melbourne has been threatened with the sack after peering into rubbish bins by torchlight and spooking elderly homeowners at 1am. It is understood several other councils pay bin cops to hunt down rogue recyclers. City of Monash spokeswoman Jodie Harrison confirmed a "rubbish auditor" had been warned to switch to more reasonable hours after "freaking out" residents. 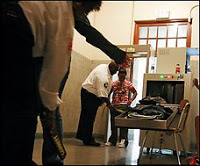 from washington post: Many school officials view metal detectors as costly, impractical and fallible. To suburban parents, they conjure up images of armed camps. Even at Albert Einstein High School in Kensington, where three loaded guns were found in a locker last week, consensus is building against them. "I don't want my son to come to school through metal detectors. That's prison," said Alex Colina, speaking to several hundred other parents at a community meeting Monday night.