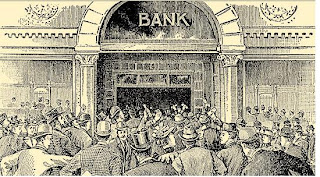 Real Currencies relates odds too great for three Dutch "Too Big To Fail" Banks to have computer system failures, simultaneously!  You might consider possibility it's a drill for a bank holiday?  The blog entry suggests:  "This week three banks, ING, Rabo and SNS, simultaneously suffered major computer malfunctions, leading to a temporary closure of their on-line facilities. Their problems were ‘unrelated’. It is completely unprecedented. The chances of a coincidence are close to zero. For years some in the blogosphere have speculated that ‘computer problems’ might be a good excuse for the Money Power to call a bank holiday and ‘reorganize’ their system. This looks like a drill."   The blog post goes further to suggest a bank holiday, would serve double-duty as a psyop: "Why is the Money Power busting its own banks? They don’t really care: all the major banks own each other. 100% market share remains guaranteed, even if some of them drop. Also, the smaller banks go first and they are gobbled up by the big boys, often with ECB/Fed/taxpayer financial support. So this crunch is also a major consolidation effort by the Money Power. Busting the banks is a good way to plausibly sell the many that the good days are over." The game is completely rigged with the banksters, holding all the cards!  A depression serves to consolidate power, and also, to reduce people's expectations for their futures!