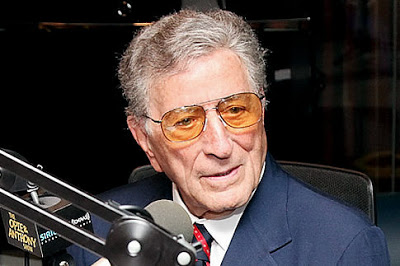 from abcnews: American icon Tony Bennett took to the airwaves at Sirius Radio to promote his new album, “Duets II,” but it’s what he said about war, peace, terrorism, and who was to blame for the Sept. 11 terror attacks that could get people talking. Sitting down with Howard Stern on Monday, the 85-year-old singer dodged questions about his sex life and prior drug use. He did so with a laugh, but matters about the U.S. military and 9/11 were fair game, and on these topics the Grammy winner held little back...

Bennett, 65 years after leaving his military life behind, has sold over 50 million albums and developed definite opinions about other wars involving the United States. “To start a war in Iraq was a tremendous, tremendous mistake internationally,” he said. Stern then asked Bennett about how America should deal with terrorists, specifically those responsible for the 2001 attack on the World Trade Center. “But who are the terrorists? Are we the terrorists or are they the terrorists? Two wrongs don’t make a right,” Bennett said.

In a soft-spoken voice, the singer disagreed with Stern’s premise that 9/11 terrorists’ actions led to U.S. military involvement in Iraq and Afghanistan. “They flew the plane in, but we caused it,” Bennett responded. “Because we were bombing them and they told us to stop.” Following seconds of silence, Stern said that his guest was “making some good points.”

and now... the inevitable back down:
tony bennett apologizes for 9/11 remarks*