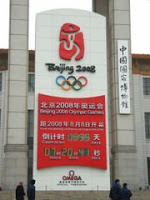 the totalitarian olympics to begin in beijing

china grateful bush crime family is coming to olympics
from mcclatchy: When Chinese leaders gaze into stadium stands Friday and see President Bush and his extended family watching the opening ceremony of the Olympic Games, they’ll feel strong gratitude for his presence. Gone will be any ill feeling about his lashing of China’s human rights record a day earlier, and his call for the nation to grant freedom and rights to its people.

from wikinews: The non-profit student-led organization Students for a Free Tibet, which seeks to make Tibet a separate country from China, has claimed that some of its activists have been detained in Beijing after protesting near an Olympic stadium, holding banners such as "One World, One Dream: Free Tibet" and "Tibet Will Be Free." The British Embassy in Beijing is investigating these reports, which involved two Britons and two Americans. A British Embassy spokesman said that they "are in touch with the Chinese authorities and are requesting immediate consular access should this information be correct."

from washington post: China's intense efforts to block any protest that would mar the Olympic Games were challenged Wednesday by foreign activists equally bent on diverting attention to issues as varied as Tibetan independence, the crisis in Darfur and religious freedom. Two American and two British protesters slipped through a smothering Olympic security net, climbed a pair of lampposts and unfurled banners demanding freedom for Tibet near the new stadium where the Beijing Games are to open Friday night. In Tiananmen Square, three American Christian activists spoke out against China's rights record and protested its population control policies. The four pro-Tibet protesters have been deported, while a second demonstration by Christian activists on Thursday was disrupted when plainclothes police removed the protesters from Tiananmen Square.

china security drags away US protesters
from reuters: Chinese plainclothes security officials dragged away three American Christian activists on Thursday after they attempted to protest for religious freedom for a second day in Beijing’s main Tiananmen Square.

Your IP address 35.172.217.174 has been flagged for potential security violations. You can unlock your login by sending yourself a special link via email. Learn More

Get help unlocking your site