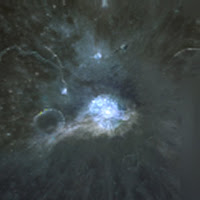 The advent of Transient Lunar Phenomena (TLP) is a relatively recent development with the term first used in 1968.  There are professionals, who still doubt whether the brief changes in light, color and appearance of moon features are just optical illusions.  A common belief is the TLPs may be "last gasps" of geological activity coming from below the moon's surface, as presented in this National Geographic Article. Statistical evidence points to their reality and research is starting in earnest, for example, at this Columbia University website, Transient Lunar Phenomena Studies.  John Lear, an ex-CIA pilot and son of Lear jet founder Bill Lear, researches UFO phenomena and believes the "Blue Gem"(pictured) of the Aristarchus crater, a prominently observed TLP, is a nuclear fusion reactor.  You may suspend judgment before you take a look at his webpage, "Aristarchus Crater: Electric Blue Gem or Nuclear Fusion Reactor?"