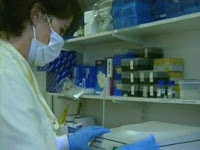 from telegraph: Suspects accused of trivial “crimes” such as picking wild flowers or defacing coins can have their DNA stored for life on a national database, police guidelines reveal.

A report by police chiefs lists more than 5,000 offences that qualify for lifelong inclusion on the database. Anyone arrested for any of the crimes will have his or her DNA taken and stored, even if charges are later dropped or the suspect is acquitted in court.

The offences show up in employment-vetting checks for years after the event. Campaigners called the guidelines a step on the road to a “surveillance society” and said the inclusion of petty offences was accelerating the growth of the database, which already holds details on four million people.