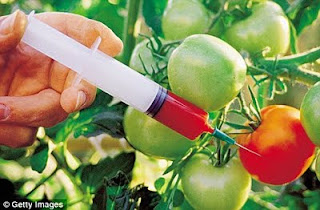 from daily mail: The big supermarkets have held secret talks to pave the way for the introduction of controversial GM crops on to their shelves, industry sources said last night. The stores banned GM ingredients more than ten years ago in response to public anxiety about their impact on human health and the environment. But a source indicated that all the major supermarkets were involved in the discussions except Waitrose. Multi-national giants have been involved in a wide-ranging campaign over the last year to suggest GM crops could be the solution to Third World hunger. That notion was rejected by a UN study last year. But the Government has ordered the Food Standards Agency to carry out a year-long spin campaign to win support for GM. Earlier this year Sir Terry Leahy, boss of Tesco, Britain's biggest supermarket, said supermarkets may have made the decision to reject GM products too hastily. "It may have been a failure of us all to stand by the science," he said.