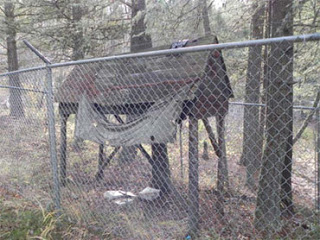 from cbsnews: The "one of a kind" western Montana property that was once owned by Unabomber Ted Kaczynski is back on the market for a bargain price of $69,500. The 1.4-acre parcel of land is listed by John Pistelak Realty of Lincoln and offers potential buyers a chance to own a piece of "infamous U.S. history." The listing also states that the forested land "is obviously very secluded." The Lincoln-area property, which had been listed at $154,500, does not have electricity or running water. Kaczynski was critical of technology. The property does not include the cabin where Kaczynski was captured in April 1996. It is on display in the Newseum in Washington, D.C. Kaczynski is in a maximum security prison in Colorado serving a life sentence after pleading guilty in 1998 to a nationwide bombing spree that spanned nearly 17 years and killed three people and injured 23 others. The Harvard-trained mathematician railed against the effects of advanced technology and led authorities on the nation's longest and costliest manhunt before his brother tipped off law enforcement in 1996.

related video: 'the net: the unabomber, lsd & the internet'