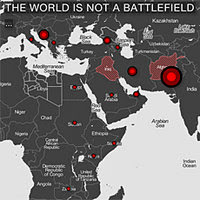 from aclu.org: Tucked inside the National Defense Authorization Act, being marked up by the House Armed Services Committee this week, is a hugely important provision that hasn't been getting a lot of attention — a brand new authorization for a worldwide war.

This stealth provision was added to the bill by the committee's chairman, Rep. Buck McKeon (R-Calif.), but has a bit of a history. It was first proposed by former Attorney General Michael Mukasey in 2008 after the Bush administration lost the Boumediene v. Bush case, in which the Supreme Court decided that federal courts would subject the administration's asserted law of war basis to hold Guantanamo detainees to searching review. An idea that may have originally been intended to bolster the Bush administration's basis for holding Guantanamo detainees is now being promoted as an authorization of a worldwide war — and could become the single biggest ceding of unchecked war authority to the executive branch in modern American history.

The current authorization of war provided the constitutional authority for the executive branch to go to war in Afghanistan. Subsequently, it has reportedly been invoked by the executive branch much more broadly to also use military force in Yemen and elsewhere, to justify torture and abuse of detainees, to eavesdrop and spy on American citizens without warrants, and to imprison people captured far from any battlefield without charge or trial.

Before Congress this week, the proposed authorization of a worldwide war goes much further, however, allowing war wherever there are terrorism suspects in any country around the world without an expiration date, geographical boundaries or connection to the 9/11 attacks or any other specific harm or threat to the United States. There have been no hearings on the provision, nor has its necessity been explained by Rep. McKeon or anyone else in Congress.

The idea that Congress is about to pass new authority for a worldwide war as we're trying to ramp down our efforts in both Iraq and Afghanistan is starting to get attention. We're hoping that the House Armed Serviced Committee, and the full House, will reconsider this troubling and dangerous provision. We'll keep you updated as this troubling provision progresses, but you can help now by telling your representative to oppose any new and expanded war authority.