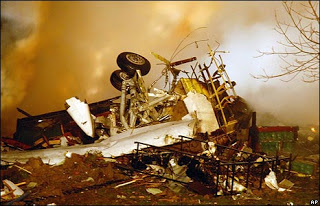 updates & oddities on the crash of flight 3407

hat tip to alex constantine for the following links & leads...

from alex constantine: This story is a bit sketchy, IMhO - obvious questions are left hanging by the reporter, to wit:

• Why didn't the police obtain a search warrant before entering John's home and frantically searching for the camera?

• The police claimed that John was on a nearby roof, allegedly accompanied by a 13-year-old boy, taping the wreckage safely beyond the police perimeter. Officials claimed that he shouldn't have been on the roof with a minor. All right. Was this such a deplorable "crime" that they went ballistic, immediately launched into an illegal search for the tape - to "prove" the boy had been on the roof? This is the stated reason for confiscating the video camera. And it's nonsensical - did it occur to these highly-trained law enforcement officials that an illegally-obtained video tape is inadmissible as evidence - the very reason given for confiscating John's camera in the first place?

Did the police have ulterior motives for scrambling after the video camera, Delta Force-style ... 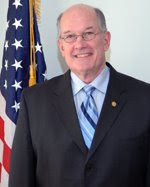 from ap: Has anyone mentioned that Steven Chealander, the National Transportation Safety Board member leading the Buffalo crash investigation, is a former American Airlines pilot and manager? As the NTSB notes on its Web site: "Mr. Chealander brings a wealth of both civilian and military aviation experience to the NTSB"... He joined American after retiring from the U.S. Air Force. We also found this interesting tidbit about the NTSB member from his official bio: "In 1986, Mr. Chealander was selected as Military Aide to President Ronald Reagan. In this capacity, he performed a variety of ceremonial and emergency preparedness duties, including custody of the President's emergency briefcase, 'the football.'"

a parmalat scandal connection to the flight 3407 crash

tragedy of the 9/11 widow, genocide-gate ties, northrop grumman & the buffalo crash... and a prior, related airplane crash