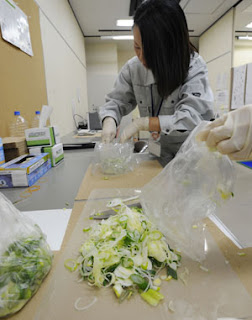 from japantimes.co.jp: For many people around the world, food from Japan used to have an image of being among the healthiest around, let alone safe to consume. That changed after March 11, 2011, when the massive earthquake and tsunami triggered the crisis at the Fukushima No. 1 power plant, the world's worst nuclear crisis in a quarter of a century. The spread of radioactive materials and revelations that some beef cattle and crops grown in its vicinity were contaminated with higher than normal levels of radiation prompted more than 40 countries and territories to restrict imports of food and other agricultural products from Japan, where Fukushima Prefecture was an agricultural powerhouse. While a handful of the foreign governments have eased or lifted the restrictions and consumers abroad are beginning to think less about the fears of radioactive contamination, efforts to restore Japanese food exports to their previous levels still face an uphill battle a year later.