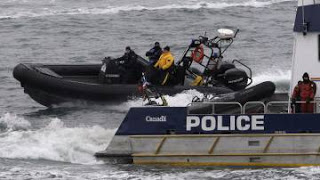 US & canada to extend security measures past olympics

from globe & mail: Canada and U.S. authorities are talking about extending cross-border security measures that were implemented for the 2010 Olympics in Vancouver and were to end with the closing of the Winter Games.

The RCMP and the U.S. Coast Guard have jointly patrolled the waters off Vancouver since the beginning of the month, boarding nearly 200 vessels and interviewing about 500 people in their efforts to maintain security, RCMP Sergeant Duncan Pound of the border integrity program said in an interview.

Almost every small craft in the vicinity of the maritime border has been contacted to confirm the legitimacy of its voyage. Although some arrests on outstanding criminal warrants have been made and some vessels have been sent back to port for not being safe, none of the incidents involved a threat to Olympic security.

The joint patrols will end with the Paralympics but spokesmen from the two agencies said yesterday legislation that would allow joint maritime policing on a permanent basis is on the agenda of both the U.S. and Canadian governments.

Also, U.S. Senator Patty Murray of Washington state has asked Secretary of Homeland Security Janet Napolitano to continue funding for the 2010 Olympic Co-ordination Centre in Bellingham, Wash., which was opened specifically to co-ordinate the U.S. response to any terrorist attack or domestic emergency during the Winter Games.

Ms. Napolitano, who will be in Vancouver on Sunday for the men's hockey final and the Olympic closing ceremonies, said earlier this week she has heard “great reports” about the centre and would talk to people this weekend on whether more funding makes sense.

Several federal and provincial government agencies from Canada were also involved, monitoring activities at the centre and establishing procedures to facilitate joint responses to cross-border events.

“They [officials at the centre] have done a remarkably great job … to ensure we have a co-ordinated security response,” Ms. Murray told a U.S. Senate appropriations committee earlier this week. “We all know the ongoing security challenges that occur at that border, a very, very complex border with water, mountains, highways, urban areas and rural areas, you name it, we got it in our region,” she said.

The joint RCMP/USCG maritime patrols, known as Siderider, have in effect erased the border on the water, enabling armed officers from either country to cross the border and play a role in enforcing the law. Each RCMP vessel has a U.S. Coast Guard member as well as two or three Mounties, while each USCG boat has a Mountie. The RCMP takes the lead when dealing with Canadians while the U.S. Coast Guard does the same with Americans.

Several RCMP officers were sent last year for training to the U.S. Coast Guard maritime law enforcement academy in Charleston, S.C. The Mounties and U.S. authorities were instructed on the laws on each side of the border and on boating and water safety regulations.

The Olympics is the third pilot project on joint maritime patrolling that the two countries have participated in, officials said. The patrols, with both RCMP officers and USCG members, are free to cross the border in pursuit of any vessel.

Under normal conditions, the U.S. Coast Guard would not enter Canadian waters and the RCMP would stop at the U.S. border. “It is just a quick getaway for criminal adversaries who try to evade law enforcement,” U.S. Coast Guard Commander Peter Martin said yesterday. “This addresses the problem so we can maintain continuous pursuit, while simultaneously respect the sovereignty of both countries,” he said.

update: US to determine who can board some canadian flights