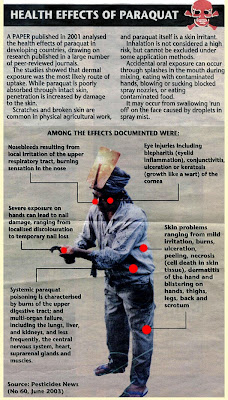 from jonrappoport.wordpress.com: You’re a farmer. Season after season, you watch your fields being taken over by Monsanto superweeds, which are resistant to the herbicide Roundup. What are you going to do? You’re locked in. You’re buying your GMO seeds from Monsanto, and the food crops that grow from those seeds are supposed to be resistant to Monsanto’s Roundup, so that’s what you spray on your crops. But the weeds aren’t resistant. They spread and they grow taller. They’re taking over.

So you, along with many, many other US farmers, go to a strategy called “burndown,” which is just as bad as it sounds. You use something a lot stronger than Roundup to kill those weeds: Paraquat, for example, which has been banned in 32 countries. You drench your fields with it in the fall. You kill anything growing. And you drench the fields again in the spring, before you plant. Then, just as you’re going to plant, you hit the fields a third time with the poison. This is in addition to all the sprayings with Roundup, which is toxic, too. Then you harvest the crops and you sell them. And consumers eat the food along with all the poison.

What would a president and his administration do to make sure the truth is overrun and squashed? In addition to silencing the media, they would appoint a host of GMO insiders to key government posts, and they would bring to market as many new GMO crops as possible, to construct a fait accompli. So let’s go to the scorecard and review the actions of Obama in his first term.