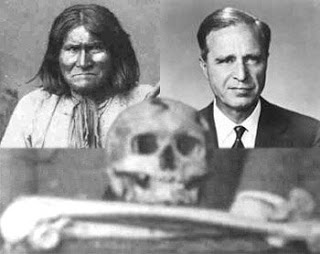 US lawmakers honor geronimo in the midst of skull & bones lawsuit

from afp: The US House of Representatives on Monday approved by voice vote a measure honoring legendary Apache warrior Geronimo's bravery 100 years after his death. The nonbinding resolution honors his life, "his extraordinary bravery, and his commitment to the defense of his homeland, his people, and Apache ways of life." Geronimo - known as Goyathlay in the language of his Chiricahua Apache - died in 1909 at nearly 90 years of age at Fort Sill, Oklahoma. He had been held as a prisoner of war for more than 20 years after surrendering to the US military on the understanding he would be allowed to return to his homeland and people. The resolution also "recognizes the 100 anniversary of the death of Goyathlay as a time of reflection of his deeds on behalf of his people." On Febuary 17, twenty of Geronimo's descendants filed suit in a US federal court seeking "to free Geronimo, his remains, funerary objects and spirit from 100 years of imprisonment at Fort Sill, Oklahoma, the Yale University campus at New Haven, Connecticut and wherever else they may be found." The remains would be returned to Geronimo's wilderness birthplace in the western United States for a true Apache burial, a key facet of the native American tribe's culture.

and still more on the new lawsuit... bush secret society sued for return of geronimo’s remains
from raw replay: CNN’s Debra Feyerick reported that the relatives of the late Apache warrior Geronimo are suing Yale and the secret Skull and Bones society for the return of Geronimo’s remains.