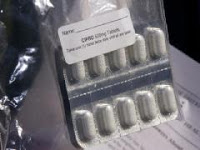 US to pay hatfill $5.8m in anthrax op settlement

from raw replay: NBC's Pete Williams reported that the U.S. Government has agreed to pay Steven Hatfill about $5.8 million in the case of the anthrax attacks that happened soon after 9/11. Hatfill had been declared "a person of interest" in the attacks. Williams said that it is "safe to assume" that Hatfill is no longer considered a person of interest. This video is from MSNBC News Live, broadcast June 27, 2008.

from ap: Drug safety officials Tuesday imposed the government's most urgent safety warning on Cipro and similar antibiotics, citing evidence that they may lead to tendon ruptures, a serious injury that can leave patients incapacitated and needing extensive surgery... The two leading drugs covered by the warning are Cipro, made by Bayer, and Levaquin, which is made by Ortho-McNeil. Cipro became a household name during the anthrax attacks of 2001. It is effective against that deadly bacteria, and is among the medications stockpiled by the government in case of a bio-terror attack.

update2: who planned the anthrax attacks?
from justin raimondo: You remember the anthrax attacks – or do you? It often seems, to me at least, that this important catalyst for the invasion of Iraq and our supremely wrong-headed post-9/11 foreign policy has been flushed down the collective memory hole. For all the attention that's been paid to that spooky chapter in the history of the "war on terrorism" in the intervening years, it may as well have never occurred. That's why news of the former prime suspect's ultimate vindication – and his victory in a $5.8 million lawsuit in which he accused the feds of unfairly targeting him as a "person of interest" (as John Ashcroft put it) – seems like a visitation from another time, the ghost of 9/11 past, haunting and mocking us. It sends chills down my spine – because, you see, the real culprits are still out there.