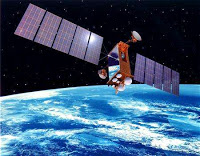 US ‘to shoot down spy satellite’

from bbc: The US military is planning to shoot down a broken spy satellite due to crash land on Earth in the next few weeks, US news agency AP reports. Pentagon officials are quoted as saying they want to fire a missile from a US Navy ship to destroy the satellite before it enters the atmosphere. Last month, officials said the satellite had lost power and could contain hazardous materials. The Pentagon is due to hold a briefing on the subject later.

flashback: broken US spy satellite could fall to earth

pentagon to shoot down rogue satellite 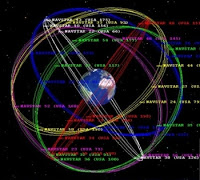 from danger room: We predicted it earlier in the week. Now it's confirmed: Despite cautionary notes from space security veterans, "the Pentagon is planning to shoot down a broken spy satellite expected to hit the Earth in early March," according to the AP. (Details of the plan, up here.) The good news, space experts tell DANGER ROOM, is that the orbital debris won't be all that bad. The problem is, the shoot-down might legitimize China's provocative moves, above the sky.

from danger room: Sometime in the next 11 days, a Navy cruiser is going to aim a missile just above the atmosphere, and try to take out a malfunctioning spy satellite before it crashes to Earth - and maybe releases a toxic gas in the process... The SM-3 missile that's supposed to do the job is at the heart of the most successful component of the American missile-defense program; unlike other, less reliable interceptors, the SM-3 has hit its targets in 11 of its last 13 tests. Two other Aegis cruisers, armed with similar weapons, will be on standby, in case the initial SM-3 fails to fire, or misses its target. 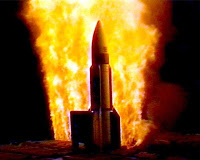 from danger room: The 'shot' - that’s what Ambassador James Jeffrey called the decision to use an an Aegis SM-3 to try to shoot down satellite USA 193 in the next 3-12 days. Holding the aside the politics of this - which are terrible - the briefing on debris risk left me cold. I have to say that I am very, very uneasy about this decision - our missile defense tests have been heavily scripted to minimize debris creation and modeling of debris creation isn’t an exact science.

america’s plans for the falling spy satellite
from raw replay: CBC looks at the U.S. spy satellite falling to Earth and what America plans to do about it. The following video is from CBC’s The National, broadcast on February 14, 2008.