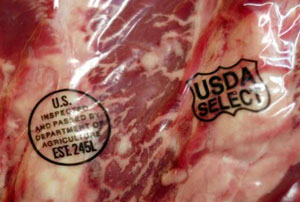 from crooksandliars.com: The Department of Agriculture (USDA) is planning to roll out a meat
inspection program nationwide that will allow pork plants to use their
own inspectors, but it has a history of producing contaminated meat at
American and foreign plants.

The Washington Post reported
on Monday that documents and interviews showed that a plan to allow hog
plants to replace federal USDA inspectors with their own private
employees had produced "serious lapses that included failing to remove
fecal matter from meat" in three of the five plants that had
participated in a pilot program for more than a decade.

And plants using the same procedure in Australia
and Canada also ran into problems. In one case, a Canadian company had
to recall 8.8 million pounds of beef products for E. coli contamination.

Most recently, New Zealand had been given permission to export meat
to the United States from plants using the inspection procedure. But
government inspectors in New Zealand have already warned that the meat
produced at those plants is contaminated at times.

"Tremendous amounts of fecal matter remain on the carcasses," Ian Baldick, an inspectors union representative, told the Post. “Not small bits, but chunks.”

In 1997, the USDA allowed five pork plants to participate in the
Hazard Analysis and Critical Control Point-based Inspection Models
Project (HIMP), which industry lobbyists claimed would accelerate
processing times while cutting down on the number of government meat
inspectors. After 15 years, a USDA inspector general report found last
spring that three of the five plants in the program were some of the
worst in the country.

A separate Government Accountability Office (GAO) report last month
said that it would be difficult to recommend rolling out the plan
nationwide.

The USDA is moving forward with rolling out the new meat inspection
procedures after the evaluation is complete in the spring of 2014. A similar plan for chicken and turkey plants is expected to be finalized later this year.