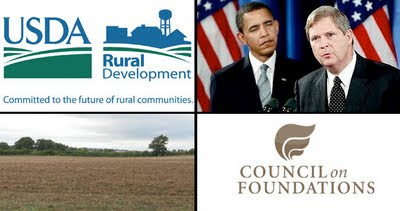 from food freedom: On Friday, Agriculture Secretary Tom Vilsack announced that USDA has signed an agreement with the Council on Foundations “to provide new sources of capital, new job opportunities, workforce investment strategies,” and, last on the list but the heart of it: “identification of additional resources.”

The group will work with Obama’s newly created Rural Council, which Vilsack also chairs, to implement UN Agenda 21 – a 300-page, 40-chapter, “soft-law” policy that came out of the UN Conference on Environment and Development in Brazil in 1992.

Though couched in eco-friendly motives, Agenda 21 will “severely limit water, electricity, and transportation – even deny human access to our most treasured wilderness areas, it would monitor all lands and people. No one would be free from the watchful eye of the new global tracking and information system,” wrote Berit Kjos in 1998. (Patrick Wood believes that today’s smart grids are doing just that, and gives an excellent 40-minute speech here.)

Ironically, the Secretary made the announcement while hosting a White House Rural Forum at the Iowa State Fair, the same day news broke about how the USDA lied to farmers and ranchers about federal drought insurance. Vilsack has refused to pay up during the worse drought in US history.

The Council on Foundations formed in 1949 and was joined by the Rockefellers in 1958. It has since morphed into a think tank drawing from the government and private sector. It is funded mainly by corporations and foundations (including Ford, Lilly, and General Mills) to provide “a wide variety of services primarily for endowed, grantmaking organizations throughout the United States and in foreign countries.”